There have been many biographies of Dr. Jose Rizal written mostly by Filipino authors and historians, but seldom have we read one by an American author. While looking for a digital copy of “Noli Me Tangere” online, I found this biographical sketch of our national hero written by an American author who translated an abridged version (Friars and Filipinos) of Noli Me Tangere sometime in 1900. His name is Frank Ernest Gannett, an American who served on the staff  of the First United States Commission to the Philippine Islands. Rizal's short biography was part of Gannett's work on the translation of the novel. His translation of the novel was copyrighted in 1900, which means that he was one of the first Americans who came to the archipelago after the Spanish-American War in 1898 and the Philippine-American War thereafter. The contents of these biographical sketch isn’t much different from the other biographies of Rizal, but what is interesting to note is that Gannett's work was one of the first to be published right after the Spaniards left the Philippines. And coming from the perspective of an American, we can deduce that this short biography on the life of our hero is comparatively more objective, and written with no bias and restriction on its contents. (Rizal being regarded an enemy by the friars and the government at that, earlier biographers during the Spanish period could not have extolled the advocacy of Rizal or else they would have been branded as his supporters and of his ilk.)

Frank Ernest Gannett mentioned in the preface of his work the reason why he translated the novel of Rizal :
“While serving on the staff of the first United States Commission to the Philippine Islands my attention was called to the life and writings of Dr. Jose Rizal. I found in his novel, "Noli Me Tangere," the best picture of the life of the people of those islands under Spanish rule, and the clearest exposition of the governmental problems which Spain failed to solve, and with which our own people must deal. It occurred to me that an English translation of Rizal's work would be of great value at the present time.”

Below is the biographical sketch on the life and career of  Dr. Jose Rizal written by Frank Ernest Gannett. 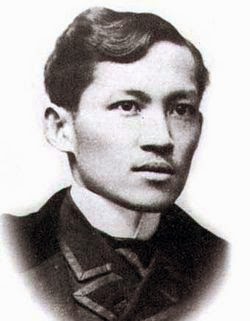 Dr. Jose Rizal, of whose "Noli Me Tangere," the following story, is an abridgement, is the most striking character to be found in the history of the Philippine Islands. He was not only a great martyr to the cause of liberty, and to the advancement of his fellow men, but he was without doubt the greatest Filipino ever born, and his memory is cherished to-day by his people as we ourselves cherish the memory of Washington.

Rizal was born on June 19th, 1861, in the pueblo of Calamba, in the province of Laguna, on the Island of Luzon. He came of a Tagalog family, which, it is said, acknowledged a slight mixture of Chinese blood, and possessed considerable property. As a child he gave evidence of extraordinary precocity. He is said to have written poetry in his native tongue at eight years of age, produced a successful melodrama at fourteen, and later to have won prizes in literary contests with writers of recognized ability.

After passing through the University of Manila, and receiving much instruction at the hands of the Jesuit fathers, he was sent to Europe to complete his education. He pursued courses of study in Spanish and German universities, and won the degrees of Doctor of Medicine and Doctor of Philosophy. Besides acquiring a knowledge of seven languages he gained a brilliant reputation for proficiency in the branch of optical surgery. For a time he was the leading assistant in the office of a world-renowned specialist at Vienna. While in Europe Rizal wrote several books and also gave considerable time to sculpture and painting. His artistic ability was great, and some of his productions are now treasured by friends into whose possession they came. Rizal's best known work is his "Noli Me Tangere," written in Belgium about 1886 or 1887. This novel, with its vivid picture of life in the Philippines, and its exposure of Spanish misrule and oppression, won for him the bitter hatred of the friars, and inspired the relentless persecution which only ended with the taking of his life.

In 1889 Dr. Rizal returned to the Philippines, but was soon compelled to leave his native land in order to escape forcible banishment. After a short residence in Japan, he went to London, where he published a work on the History of the Philippine Islands. About the same time a sequel to "Noli Me Tangere," entitled "El Filibusterismo," was published. The hatred of the priests against him was further inflamed by this production, and the government in Manila was forced by the friars to forbid the circulation of any of his writings. Copies of his novels were burned in the public squares, and it was worth one's life to be found possessing a copy. Until very recently it has been almost impossible to obtain a copy of Rizal's works, and it was necessary to go to Europe to secure the one from which the following abridged translation was made.

In 1892 Dr. Rizal was so overcome with a desire to see again his beautiful fatherland that he ventured, in the face of all the dangers that threatened him, to return to Manila. He had scarcely set foot on shore, however, before he was arrested and thrown in prison. The friars demanded his execution on the ground that he carried incendiary leaflets for the purpose of stirring up a rebellion, but subsequent inquiries showed that such leaflets had been introduced into his baggage at the custom house through the intrigues of the Augustine friars. Despite his indignant protestations of innocence; Rizal was summarily condemned by the Spanish General, Despujols, to banishment at Dapitan in the island of Mindanao. Although the trickery of the friars became known to him, Despujols lacked courage to revoke his order of banishment, for fear that he, too, would incur the hatred of the powerful religious corporations.

After four years of exile Rizal saw plainly that the hostility of the friars would make it impossible for him to live in his native land. In 1896 a plague of yellow fever broke out in the island of Cuba and Rizal volunteered to lend his medical services to the Spanish government. Ramon Blanco, then general-in-chief of the Spanish forces in the Philippines, accepted the generous offer and recalled the young man to Manila that he might sail at once for Cuba. Alarmed by demonstrations of popular affection for Rizal, who represented the aspirations of the Filipino people, the Spanish authorities broke faith with him and imprisoned him in the Fuerza de Santiago. He was arraigned on false charges, given a military trial, and at the dictation of the religious orders was sentenced to be shot as a traitor.

At dawn on December 30th, 1896, he was led to the place of execution on the beautiful Luneta, overlooking the tranquil surface of Manila Bay. Notices of the event had been published throughout the islands and the day on which it was to occur was proclaimed a fiesta. Thousands ngathered around the place selected, and so evident was the sympathy of the helpless Filipinos for the man who was to die for their sake that Spain marshalled ten regiments of her soldiers about the spot. The populace must be intimidated. A nation's hero was about to become a nation's martyr. With face uplifted he glanced at the multitude about him and smiled. They tied his arms behind him and made him face the waters of the bay. In vain he protested and begged that he might die facing his executioners. A squad of his fellow countrymen, who were serving in Spain's army, were selected for the bloody work. They drew in position to shoot him in the back. The order was given to fire, but only one had the courage to obey. The bullet went straight and the hero fell, but another shot was necessary to despatch his life. His newly wedded wife remained with him to the end. The best hope of the Filipino people was crushed; a light in a dark place was snuffed out.

Rizal was no extremist, no believer in harsh and bloody methods, no revolutionist. He aimed to secure moderate and reasonable reforms, to lessen the oppressive exactions of the friars, to examine into titles of their land, and to make possible the education and uplifting of his people. He loved Spain as he did his own country, and repeatedly used his influence against the rebellious measures proposed by other Filipino leaders. His execution was only one of the numerous outrages which characterized Spain's reign in the Philippines.

In closing this short sketch of Rizal's life we can do no better than to quote the estimate of him made by Dr. Ferdinand Blumentritt, professor in the University of Leitmeritz, Austria, who prepared a biographical sketch of Rizal. Dr. Blumentritt said:

"Not only is Rizal the most prominent man of his own people, but the greatest man the Malayan race has produced. His memory will never perish in his fatherland, and future generations of Spaniards will yet learn to utter his name with respect and reverence."