Do you eat meat products? Wear leather shoes and use leather bags? Go to zoos and circuses? Or do you own a pet? If you do, please watch this documentary.

This documentary is about the maltreatment of animals by humans. How an earthling treat  a fellow earthling. Directly or otherwise, as end-product users  and consumers of animal products we are partly responsible for the maltreatment and suffering of these animals. Our high demands for  animal products would further promote this kind of treatment on animals. Animal use on research and medicine are beneficial to humans but animals are sacrificed and they pay the high price for us. Watching this documentary may make us think that it is high time that we, humans, give the animals a better treatment and the respect they deserve as fellow earthlings.

About the documentary :
Source: Earthlings.com


EARTHLINGS is an award-winning documentary film about the suffering of animals for food, fashion, pets, entertainment and medical research. Considered the most persuasive documentary ever made, EARTHLINGS is nicknamed “the Vegan maker” for its sensitive footage shot at animal shelters, pet stores, puppy mills, factory farms, slaughterhouses, the leather and fur trades, sporting events, circuses and research labs.

The film is narrated by Academy Award® nominee Joaquin Phoenix and features music by platinum-selling recording artist Moby. Initially ignored by distributors, today EARTHLINGS is considered the definitive animal rights film by organizations around the world. “Of all the films I have ever made, this is the one that gets people talking the most,” said Phoenix. “For every one person who sees EARTHLINGS, they will tell three.”

In 1999, writer/producer/director Shaun Monson began work on a series of PSAs about spaying and neutering pets. The footage he shot at animal shelters around Los Angeles affected him so profoundly that the project soon evolved into EARTHLINGS. The film would take another six years to complete because of the difficulty in obtaining footage within these profitable industries. Though the film was initially ignored by distributors, who told Monson that the film would “never see the light of day and should be swept under the rug,” today EARTHLINGS is considered the definitive animal rights film by organizations around the world.

Nation Earth was established to produce documentary films on socially urgent issues. EARTHLINGS, released in 2005, was the company’s first feature film and is the first of a documentary trilogy. The company is currently at work on the second installment, UNITY, which will explore the unifying force of consciousness found in nature, animals and humankind. UNITY is scheduled to be completed in 2010. For more information please see www.unitythemovement.com. 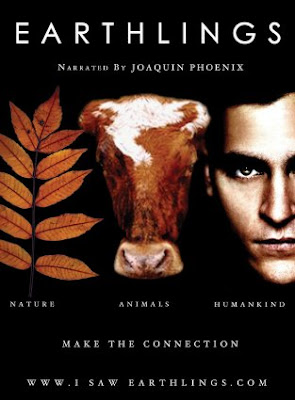